The City of Oxford Youth Band conducted by Nobby Challis, playing at a fundraising event in Kennington as part of the 1970 Kennington Overseas aid week. 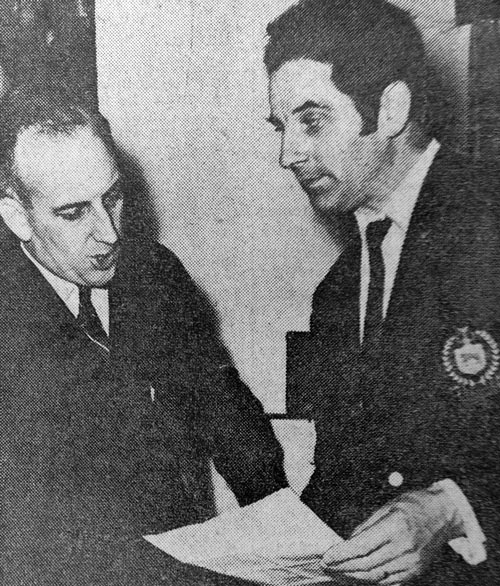 Tour of France and Germany.

It was on this tour that Heinrich Walter, band leader of Nordlingen's brass band composed The City of Oxford Silver Band March for the visitors from Oxford. 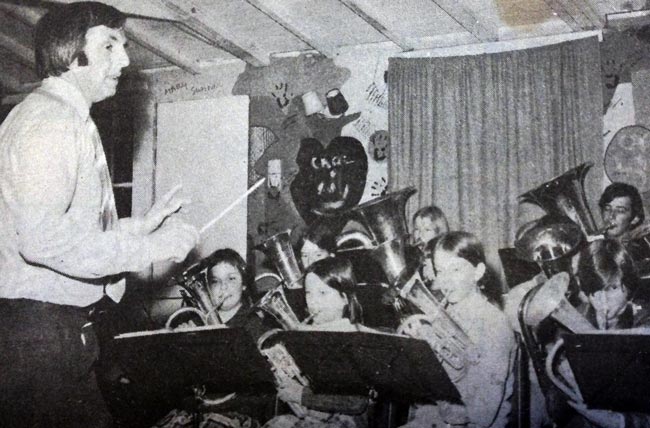 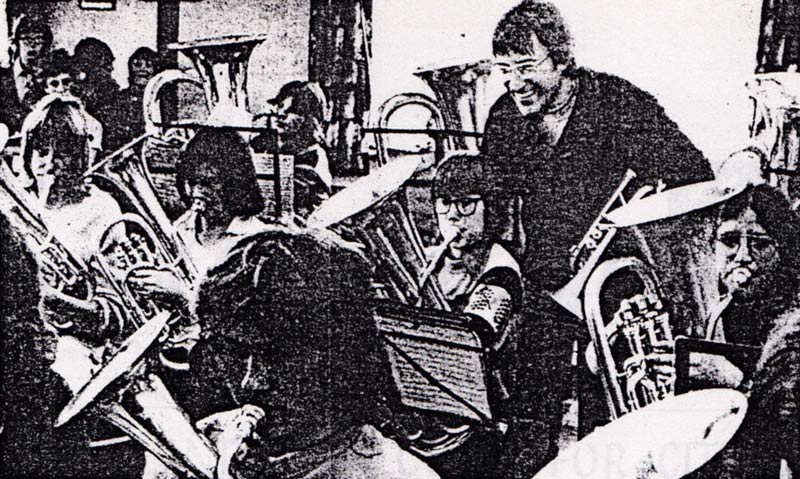 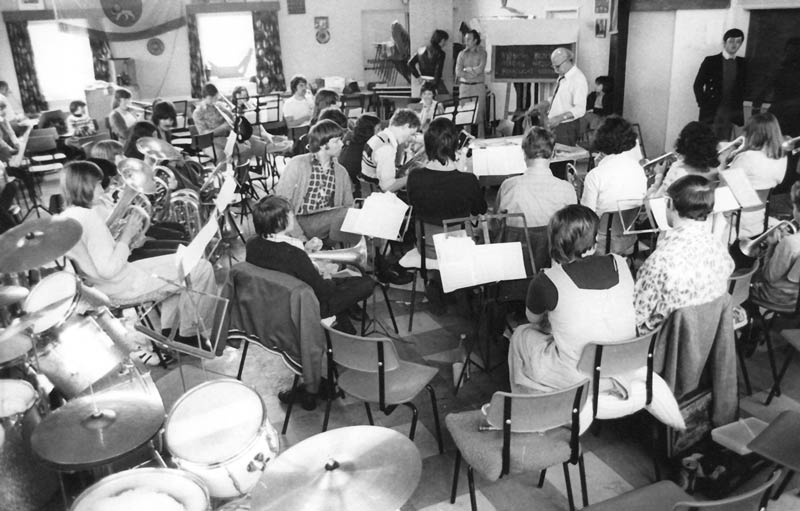 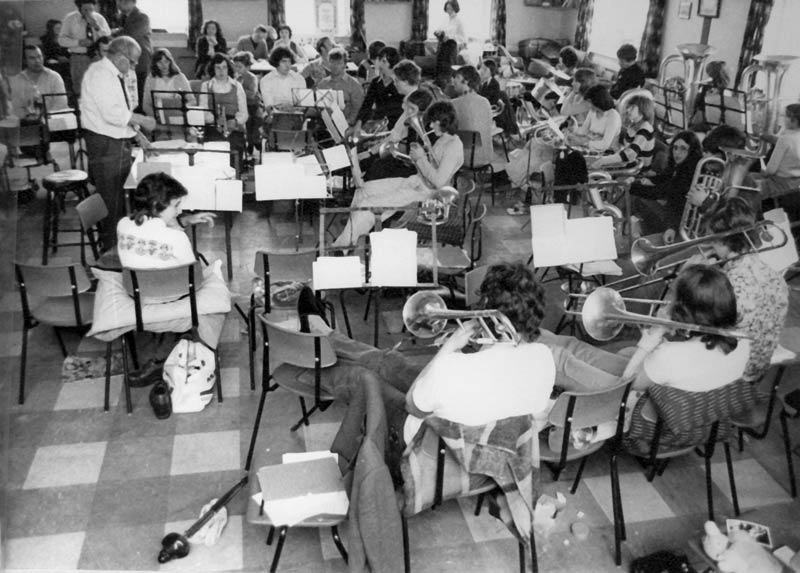 The City of Oxford Youth Band, shown being encouraged by Roy Castle, broke the record for continuous playing by keeping going for 28 hours 45 minutes. 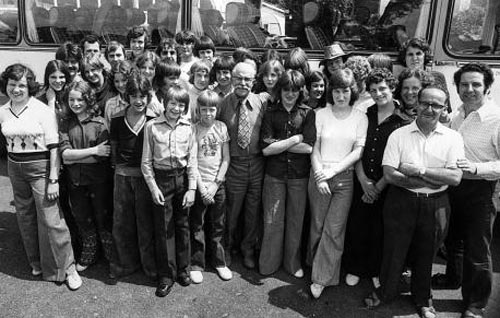 The City of Oxford Silver Band preparing to leave Oxford for a concert tour of Germany and Holland. 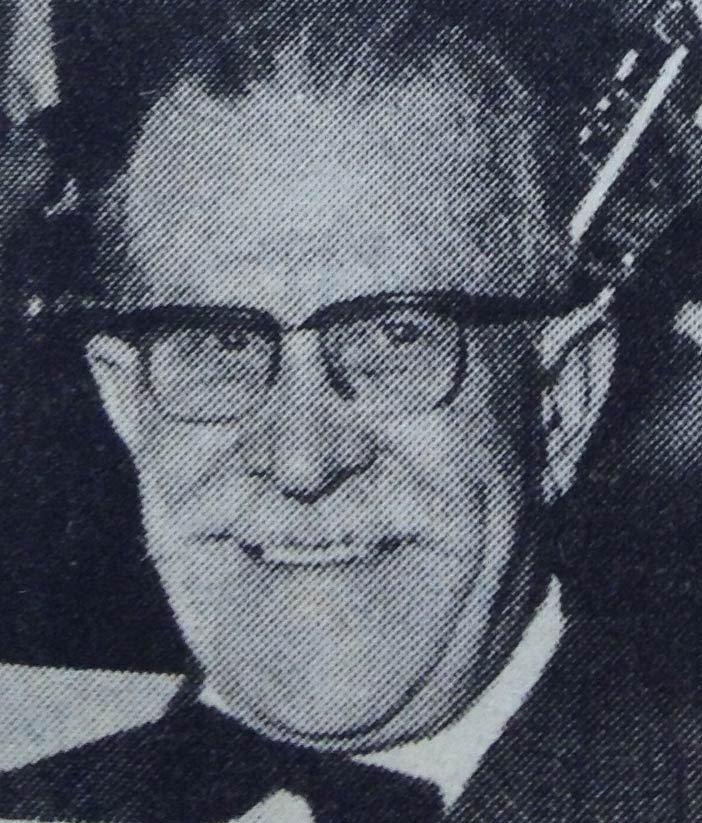 THE MUSICAL director of the City of Oxford Silver Band is stepping down off the rostrum after 27 years of increasing success.

Mr Nobby Challis, who restarted the band after the 1939-45 war, took his last regular youth band practice and then looked forward to some moments of leisure.

The band now fields three regular sets of players and plays in the championship section in silver band competitions.

The direction of the band is to be taken over by Mr Don Lewis and - following a committee inquiry into the way the band is run - new guidelines have been drawn up for the officials.

Friction between some of the leading members of the band, which led to an angry resignation letter from Mr Challis, was caused by "failure to have clear and up-to-date rules defining the responsibilities of the committee and the officers," says the committee report.

But Mr Challis says he is not leaving because of disagreements with the band but because he was committed to five evenings a week working.

"I went down to see my sisters in Cambridge," he said, "and they told me that they had not seen me for five years. I decided it was time to call it a day."

Mr Challis and his wife have not had a proper holiday for 20 years, although he has been on tour with the band to Holland.

"The American tour is coming up this year and me being my age I don't suppose I should have gone," he said.

Mr Challis said he would still help the band when he was needed.

"The only rehearsals I have missed in all the years were when I had broken my ankle and when I was in bed with the shingles."

Tour of US and Canada

The City of Oxford Youth Band embark on a tour of the USA and Canada. Jim Alder composes the Bicentenary March.

The City of Oxford Youth Band conducted by Terry Brotherhood record an LP.

Discord between the organisers of the City of Oxford Silver Band has led to the resignation of Mr Ken Membury, the leader of the band's junior section, and 25 of his young musicians.

The breakaway group have reformed themselves at the Jubilee Brass (Oxford) Band, and they are already accepting bookings.

The sudden departure of the players came as a complete surprise to the band committee. They gave no prior warning, but just arrived at a rehearsal and returned their instruments.

More than 30 were involved originally, but at a meeting called a few days later to try to patch up affairs some of the players were persuaded to stay on my My Terry Brotherhood the band's musical director.

Mr Membury said of his resignation: "There's a little bit of internal politics in this."

THe accused the band committee of trying to build up senior sections of the band with his junior members.

"The parents didn't see any future for their children, so they have gone out alone and decided to form their own band."

Mr Frank Wolff, the secretary of the band committee, retaliated by accusing parents of trying to interfere in the band's musical policy.

"It's nonsense to say that we have been trying to stock up the senior band. People ought to realise that young players who come to us must be given the chance to progress musically. It's no good for them to play Baa Baa Black Sheep all the time."

"This is why we move them into senior sections: it's a decision we take as a democratically elected committee, and the parents have no right to interfere."

"We are still very much in business, and relations between us are better than they have been for years," he said.