As Oxfordshire’s longest established brass band we have a rich, varied and sometimes confusing history.

The founding of the Headington Brass Band 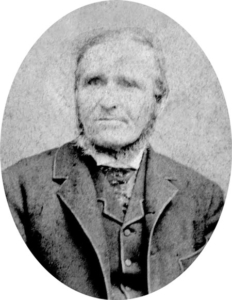 Legend has it that the band started in 1887 when Alfred Taylor, his sons John, Dan and Fred and eight of their friends came together to play as the Headington Brass Band. However, it is clear from newspaper reports that a band of that name existed at least as far back as 1849, and that Alfred Taylor and his brothers were all members of it in 1857.

Between 1849 and 1887 the band’s presence is reported frequently at local gatherings.   1887 was a jubilee year and many bands formed or reformed to take part in the celebrations. It is possible therefore that 1887 saw some form of reorganisation but for now, the exact origins of the band remain something of a mystery.

In the 19th century the band’s activities included playing at village feasts, horticultural and livestock shows, Friendly Society gatherings, processions and marches. In the summer of 1887 the band played at celebrations to mark Queen Victoria’s Golden Jubilee and in 1894, at the Oxford Waterman’s regatta, the band played from the Varsity barge. 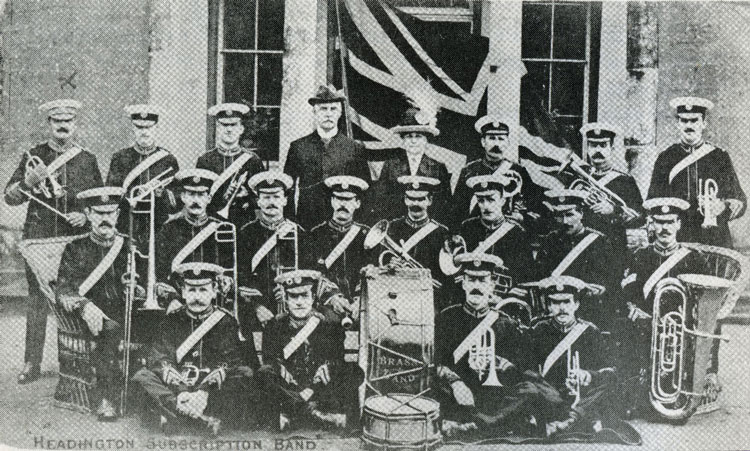 The Headington Subscription Band in 1912
The M.P. for Woodstock and also band patron Alfred St. George Hamersley is pictured standing in the back row.

The band has been known by various different names

The band has been known by a number of other names since its formation as the Headington Brass Band in the 1840s. In the early 1880s the band operated a Senior and a Junior band.   In 1886 the Headington parish magazine refers to the Headington Uniform Brass Band, then from about 1893 it was known as the Headington Temperance Band. The assistant bandmaster in 1911 – retired police constable Charles Clinkscales – was also manager of the Headington branch of the British Workman, the name for temperance public houses closely associated with the Church of England Temperance Society (CETS). Around the turn of the century it is referred to as the New Headington Wesleyan Brass Band.  The band rules from 1911 show that the temperance requirement was strictly enforced for many years but the name was dropped in June 1912 in favour of the Headington Subscription Band.

Later names were the Headington Silver Band, reflecting the purchase of silver-plated instruments in 1914 and Headington Silver Prize Band, upon winning first Oxford and District Brass Band Association contest at Kirtlington Park in 1923.

In 1925, when the band had largely severed its links with Headington, and having moved its headquarters to the Cape of Good Hope public house on The Plain, nearer the centre of Oxford, it was proposed to remove Headington from the name, this did not actually occur until November 1951 when it finally became the “City of Oxford Silver Band”. 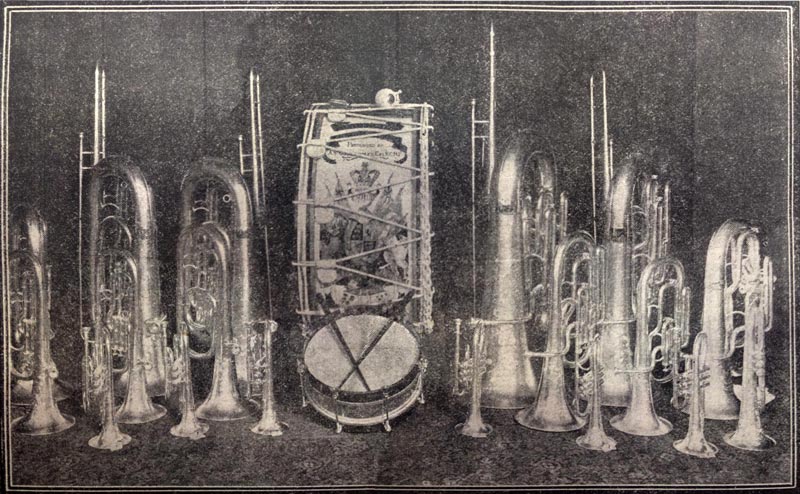 The silver-plated instruments purchased in 1914 from J. Higham of Strangeways, Manchester.
The instruments were presented at a concert held at the field school. The event was reported in the Oxford Chronicle.

By the late 1920s, the silver-plated instruments purchased in 1914 needed to be replaced. The band negotiated a hire-purchase agreement with Boosey and Hawkes to purchase a full set of new instruments at a cost of £678 (about £37,000 in today’s money) and the old instruments appear to have been sold off. The band would struggle for the following years to pay off the debt which was not finally cleared until 1946. When war came in 1939 the band became so depleted by members leaving for war service that the decision was made to wind up the band for the duration. The instruments were then loaned to the Pressed Steel Band. When the war ended and the old members wanted to reform the Headington band they had considerable difficulty in securing the return of the instruments which delayed the reformation of the Headington band. Eventually this was achieved and the Headington Silver Prize Band restarted in 1947. 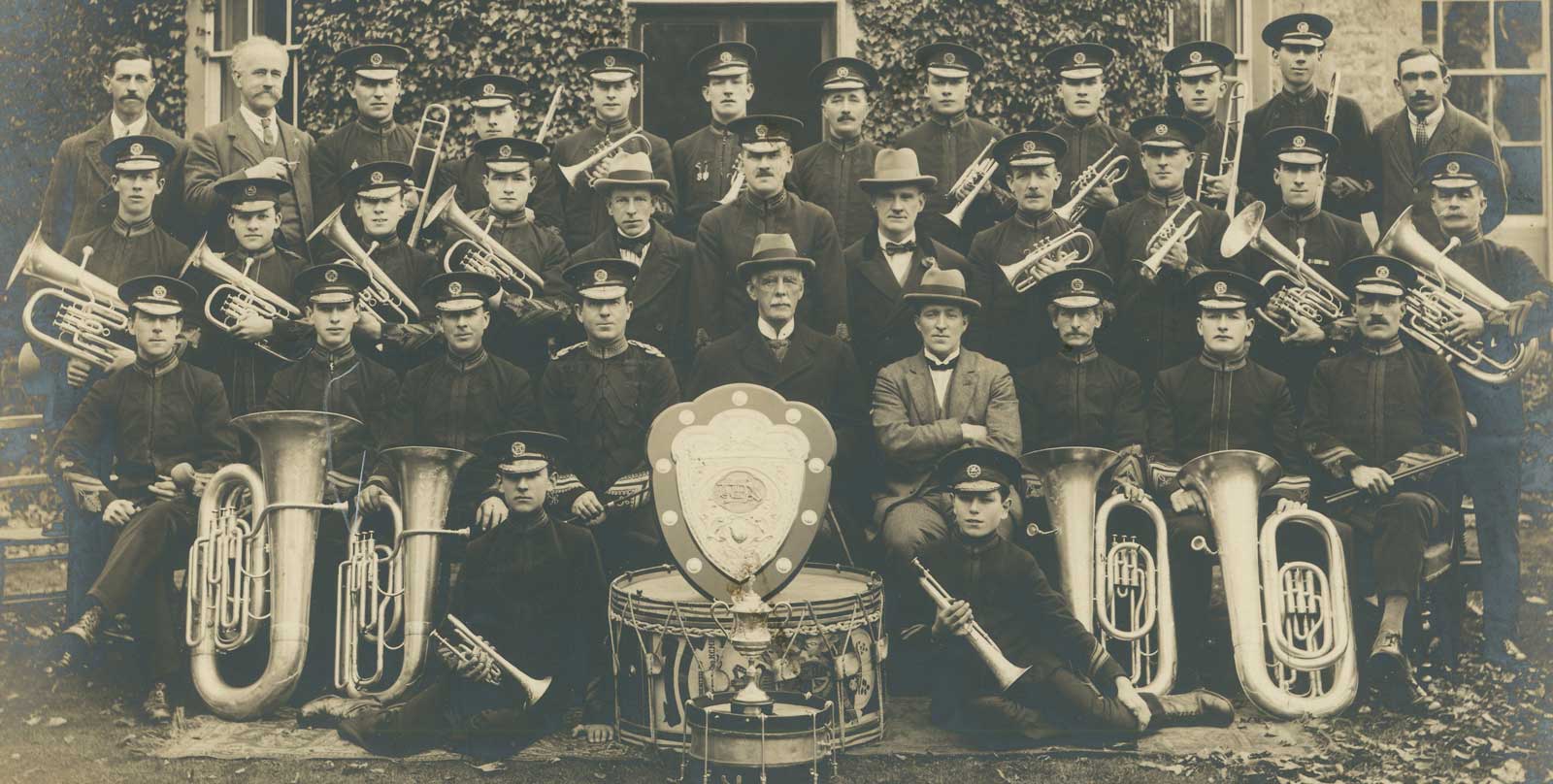 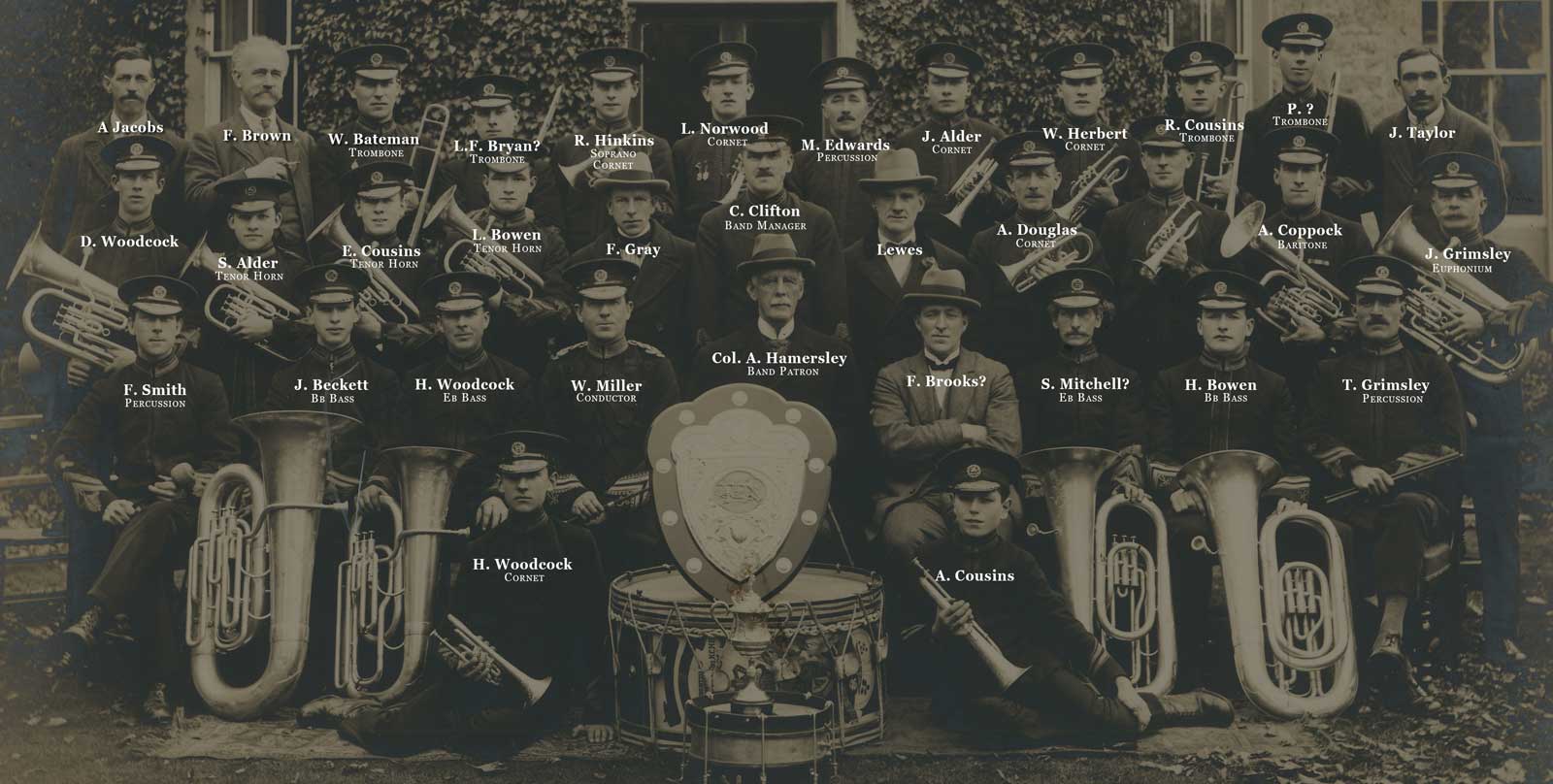 The Headington Silver Prize Band Summer 1923
The band were photographed with the Frank Gray Shield outside The Manor, Headington (the site now faces the John Radcliffe Hospital) following success at the 1923 Oxford and District Brass Band Association contest. Among those featured: Frank Gray MP for Oxford and Band Vice-President, and Colonel Alfred St. John Hamersley, MP for Woodstock and Band President.
(Use the slider to reveal names; thanks to Angela Knight for supplying many of the names)

The repertoire of the past was very different from today, being largely classical pieces, and dances.  The following programmes from 1884 are from a fete at Nuneham at which both the Junior and Senior band performed.  Also shown are several programmes from the 1920s continuing the classical theme and featuring then-current test pieces, almost all still in our library, available to play again, should the need arise! 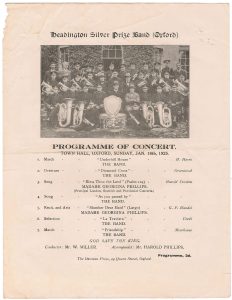 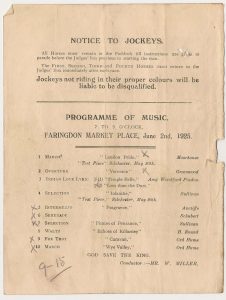 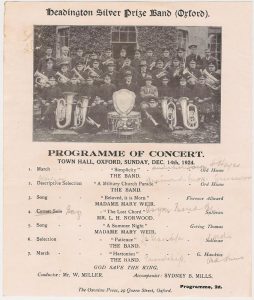 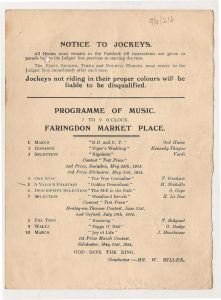 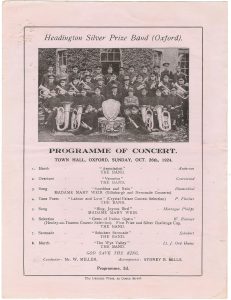 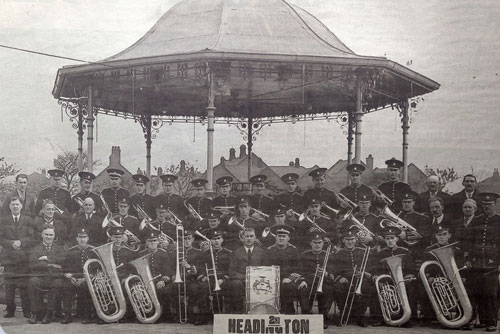 Contesting began in 1922. Since that time there have been some great successes notably in the championship section of the National Brass Band Association in 1987, its centenary year, and, still in the first section, in 1994. 1997 was another peak, when the band under Nigel Taken scooped eight trophies in five months and became London Southern Counties Champions in March. In 1995 the training band came sixth in the regional qualifying contest of the National Brass Band Championship. Since the millennium, they have regularly entered the annual brass festival of the Oxford and District Brass Band Association as quartets, winning merits for their playing in 2003 and 2004.

As well as competing, from 1926 to 1970 the band held an annual brass band contest at Oxford Town Hall. 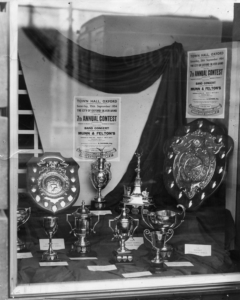 The City of Oxford Silver Band has been contesting since 1922. This page lists known results. Additions and corrections are welcome.

Band tours of Europe and America since the 1950s

Touring overseas began with a visit to Holland in 1957 when COSB marched to the Airborne Cemetery at Arnhem. 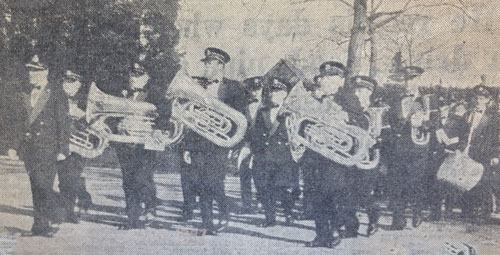 The band went on a tour of France and West Germany in 1973. It was on this tour that Heinrich Walter, band leader of Nordlingen’s brass band composed The City of Oxford Silver Band March for the visitors from Oxford. This piece is always in the band’s repertoire. In 1976, they ventured as far as USA and Canada. Later trips were to Bonn in 1987 and Wilitz, Luxembourg in 1988.

The City of Oxford Youth Band tour Norway in the 1970s

Terry Brotherhood, Speaking on BBC Radio Oxford, describes the 1976 tour of the USA and Canada…

Musical tuition for all ages

Training as a regular activity began after the First World War.  It was the brainwave of Charles Clifton, the band’s secretary of the time, who imported a coach, Tommy Wornall, from London to improve playing.  At the same time, a trombone player called Walter Coppock formed a group of twenty youths to start playing brass instruments from scratch, amongst whom was one Jim Alder who joined in 1918 and was a member, off-and-on until his death in 2004 – read his memories of the band.  After strenuous efforts, they were promoted to play with the experienced players, who had been much depleted and weakened by war service.  This approach to nurturing new talent flourished especially in the 1950s, 60s and 70s under the leadership of Alder and Nobby (Cyril) Challis. Challis, who had first joined the band in 1936, and was especially interested in getting young people involved in musical training and oversaw a huge expansion in the organisation.

Nobby Challis recorded at the Pressed Steel Company in about 1974. 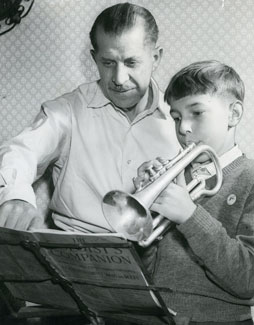 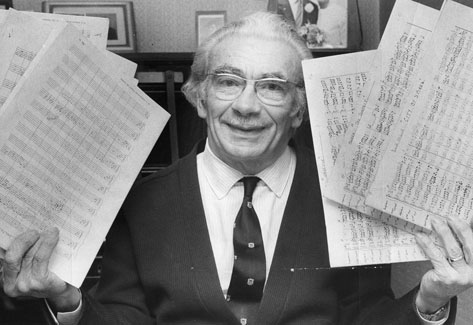 Finding a home of our own 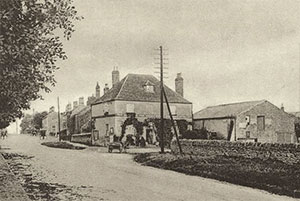 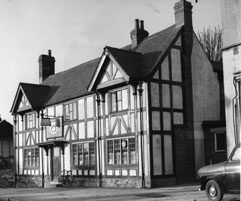 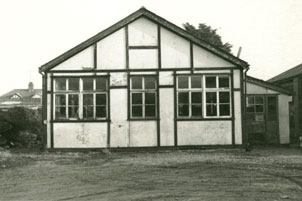 The band had no permanent home until 1966. Prior to that the band had rehearsed in a plethora of locations across the city. These include the Field School (Headington, now St Andrews CE Primary), a clubroom at The Britannia Inn, Headington; a hut at the Wingfield Hospital (Headington); The Cape of Good Hope, on The Plain, Oxford (from 1925); The Cowley Road Picture Palace, The Magdalen Arms, Iffley Road; The Carpenters Arms, Hockmore St, Cowley; The Cowley Workers Social Club; Bedford House, Cowley (The Cowley Community Centre); a hut originally built for Milham Ford School at Cowley Place and later used by Magdalen College School and subsequently dismantled and laboriously re-erected by band members in Cowley (1957); finally a canteen at the former Cowley Barracks (1963).

When Alderman Parker became Lord Mayor of Oxford in 1963, he chose the homeless musicians as his good cause for the year. The result was that in January 1966 he laid the foundation stone of the present band hall which opened in October of the same year.

Playing in public, whether for a fee or to support a charitable cause, has always been the core activity of the band. The Rules of the Headington Silver Prize Band of 10th March 1937 define its aims as ‘to promote and maintain in the district a first class Amateur Band, to foster the spirit of Good Fellowship among the Members and to obtain for all Members all possible advantages consequent upon organised combination.’ From the point of view of the band’s motto, ’Friendship through music’ or ‘Amicitia per musicam’ if you like it in Latin, probably the most curious rule was ‘All are asked to refrain from commenting on the efforts of any other Member.’ Presumably, that was the conductor’s job!

Village feasts, playing for dances and the temperance connection are strands of the band’s life that have now vanished. On the other hand, women and girls are now playing members. In the photograph which accompanied the programme of the 75th anniversary celebrations in 1962, all the members were men and youths. By 1975, when the Youth Band broke the World Record for continuous playing by keeping going for 28 hours 45 minutes under Nobby Challis’s baton, girls were among those who took part.

Over the years of its existence, COSB has amassed a large library of brass band music, running to at least 44 filing cabinet drawers, and a collection of brass instruments for members to use. It offers young people the chance to try to play an instrument their parents would never buy them on a whim, like the tuba or a bass trombone. Above all, it offers members the chance to play cheerful music regularly with other people, for other people.

If you know more about the history of the band or were a past member please get in touch.