I am sorry to learn that Mr. C. E. (Charlie) Clifton, for many years secretary of Headington, and brother of the Denton Original band's secretary, has been seriously ill for some weeks past. but I hope that he will soon take a turn for the better.

In 1940 [18 May] Charles Clifton who, at the age of 60, had just retired from work became very ill and died. It was then decided by the trustees and Band Committee to close the Band down for the duration of the war. JA

The Pressed Steel Band, a works band, apparently formed out of a Home Guard unit in 1941, seek to negotiate to buy the instruments formerly used by the Headington Silver Prize Band.

A meeting was held at 45 St. Giles, of former band members and members of the carnival committee to discuss re-forming the Headington Silver Prize band.

Apparently some time during the war, the Pressed Steel works decided to start a Band and approached the trustees for the loan of the instruments, music and music stands. Some of our Band members who had not gone into the armed forces and were employed at Pressed Steel works were, I believe, behind this. The trustees agreed to the transfer of instruments etc. When I came out of the RAF at the beginning of 1946, I was very surprised to learn of this and immediately got in touch with the trustees with a view to getting the instruments back and restarting our Band. Without going into details let me say that it took twelve months to get the property returned as Pressed Steel were very loathed to part with it and we had to wait until they got another set of instruments.JA

I also hear that Pressed Steel have secured another set of instruments, those that they have hitherto used being the property of Headington Silver who are shortly hoping to restart, under their old bandmaster. Mr. J. Alder. We shall all welcome these fine old contestors back to the fold.

The Band restarted in January of 1947 with myself as Bandmaster until the end of 1951 when I was obliged to give up owing to ill health, more or less a result of some of my wartime experiences.JA

Headington, one of the "giants" of prewar days, are again getting on their feet and hope to compete at Oxford on June 21st. Mr. J. A. Alder is again in command, and with his ability and enthusiasm should again bring his band to the fore.

The Oxfordshire & District Contest (Section 2) was held at the Botley Recreation Ground in Oxford, Headington came second. The test piece was "Recollections of Mendelssohn". Headington came first in the March.

Headington, revived under "Jimmy" Alder, with most of the old membership again round the stand ; their first public event was to play to the inmates of Oxford Prison, where they were well received.

It is not often that we hear nowadays of bands being out and about early in the morning, but this was the case with Headington on May morning, when they were out in Oxford for the annual ceremony, playing for the country dances.

Headington's engagement list, I hear, has not been so large as it might have been, but they have done well wherever they have been. They were engaged to give two concerts at Abingdon on the 29th, in aid of the funds of the town band there; as a matter of fact, it may be said that they offered to give these concerts for the bare transport costs and teas as a gesture of goodwill, which is at all time characteristic of this band. Although they have lost one or two player, a well-balanced side is still kept, and with Mr. J. A. Alder in command, with the veteran, Mr. Harry Giles, attending to the business side, their success is assured.

Headington's A.G.M. showed a good year's working, with a balance in hand of over £131 on a turnover of £760. The band are in good form, and hope to enter the Daily Herald Contest this year. Concerts are booked for Watlington Cinema on the 6th and at Oxford Town Hall on the 27th, with plenty of other functions pending.

Headington opened the parks season at Oxford on Whit Sunday and provided an enjoyable programme of music; they were also engaged on the following day at a sports meeting in Oxford, and again fulfilled their duties admirably. They are booked for the first of the season's concerts at Abingdon on July 3rd.

The Committee of the Headington Silver Prize Band, and in particular, their very able secretary, Mr. G. H. Giles, are to be congratulated on the success which attended their second annual contest, held in Oxford Town Hall, on October lst, and also for the success of the grand concert by the renowned Black Dyke Mills Band, which followed.BRASS BAND NEWS, NOVEMBER 1949 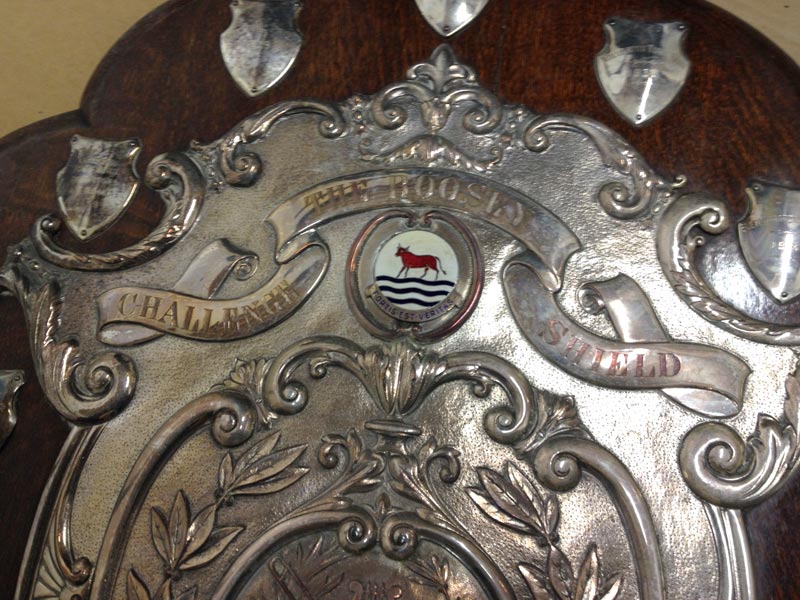 Hazell's band, competing at the Headington Silver Band Contest at Oxford on Saturday, were awarded the Boosey Shield for the best band in the Oxford Brass Band Association.

Headington are still keeping busy entertaining the football fans on the Headington Ground; they also visited Abingdon to give a concert there on Fair Sunday, and were in good form ; a pity that they did not get a better house, however.