The City of Oxford Silver Band hosts its annual contest at Oxford Town Hall. Winners were: Section A: Berry Hill Silver, Section B: Mansfield Borough Silver. There was no Section C contest on this occasion. 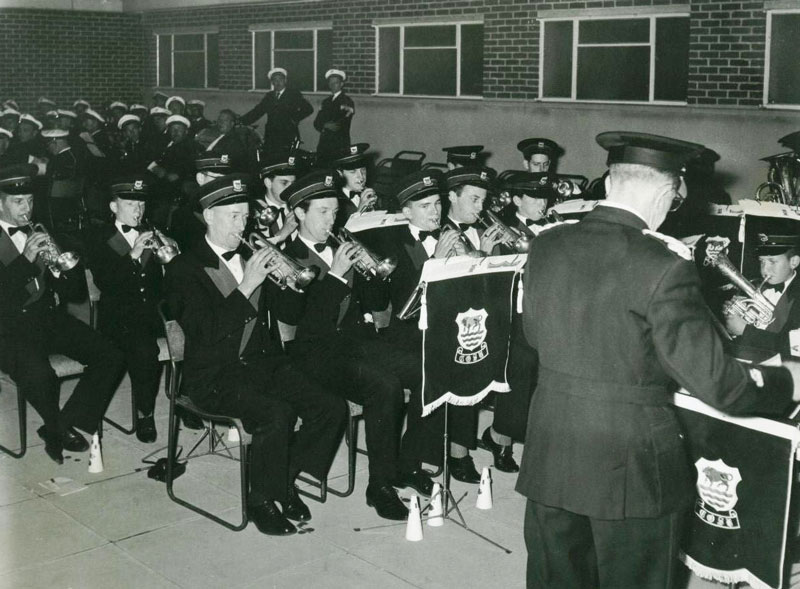 The band celebrates its '75th Anniversary' with a series of concerts, visits from overseas bands and a commemorative booklet.

The City of Oxford Silver Band hosts its annual contest at Oxford Town Hall. Winners were: Section A: Aldbourne Silver, Section B: City of Leicester W.M.C. An evening concert was performed by the Ransome and Marles Works Band.

COSB to play at Highbury!

COSB to play at Highbury!

The City of Oxford Silver Band will be playing away on January 5 thanks to a very sporting gesture by the Metropolitan Police.

As every supporter of Oxford United will know this is the day that the United meet Arsenal in the third round of the F.A. Cup and the Police the resident band at Highbury, have very kindly agreed to step down from the rostrum for that day so that, from the bandstand at least, Oxford can call the tune.

Mr. F. Wolff, the band secretary, says: "We are all delighted to be able to play to our own home team on such an important occasion. A special programme will be arranged and this I am sure will be very much welcomed by all present waiting for the kick-off, which we trust will bring United a step nearer Wembley.

Well, at any rate the music will be in their favour. All we've got to hope now is that the score will be too.

The Match finally took place on 30 January 1963 (the earlier fixture cancelled owing to the weather) and Arsenal beat Oxford United 5-1. Unfortunately for some reason the band were unable to attend. 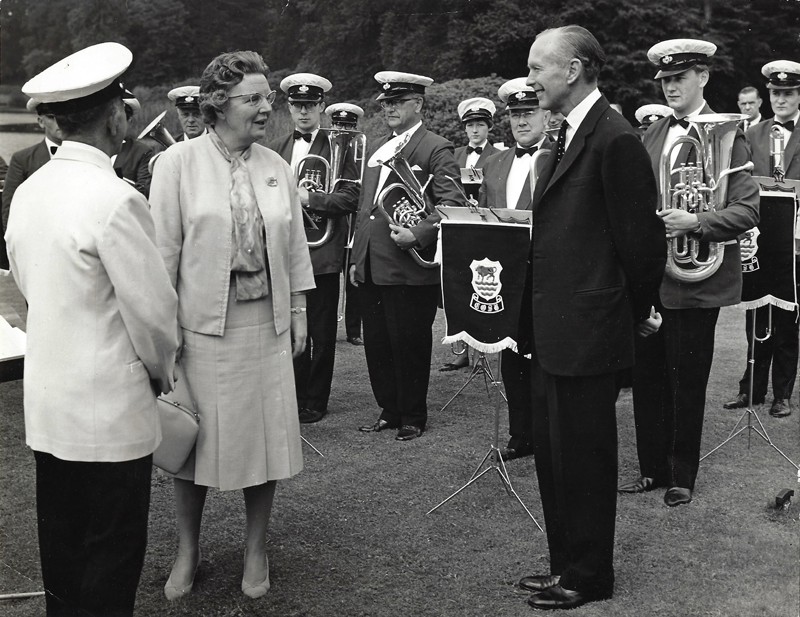 40 bandsmen of the City of Oxford Silver Band, accompanied by more than 70 of their wives, families, and supporters, spend ten days in Holland. The tour included a performance for Queen Juliana, a return visit to the airborne Cemetery at Arnhem and an appearance on Radio Hilversum.

Lord Home, Britain's Foreign Secretary, chats to Queen Juliana of the Netherlands after a performance by the City of Oxford Silver Band in the garden of the Queen's Palace at Soestoijk, Netherlands, today. Lord Home and his wife were paying a courtesy call on Queen Juliana during their visit to Holland. The Oxford Band is on a ten day tour of the country.

The redevelopment of Cowley centre means the band has to move out of its laboriously constructed bandhall. It moves its headquarters to the former officers' mess at Cowley Barracks on Hollow Way.

Band plays in the parks

The City of Oxford Silver Band play concerts in Oxford's public parks for the first time since 1948.

For the first time for nearly 15 years, people were yesterday able to sit in an Oxford park and listen to a silver band.

Many hundreds arrived at Cutteslowe Park in the afternoon to hear performances given by the City of Oxford Silver Band.

A band spokesman said: "In the past we have not been allowed to do this by the City Council - partly because it was thought there was a lack of demand.

"We had plenty of support today and are asking everyone who wants more of this entertainment to contact their local councillors and tell them." 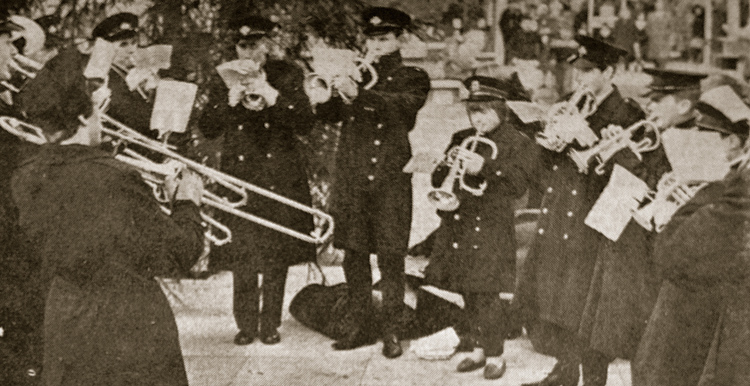 The City of Oxford Silver Band entertaining Christmas shoppers on Saturday afternoon with a programme of carols.

This was another in the series of informal concerts which the band is giving to raise money for its new building to be built near Temple Cowley Baths. The Lord Mayor of Oxford. Ald. Alec Parker, has launched an appeal fund to help the band.

By playing carols at Cowley, Blackbird Leys, Minchery Farm, Marston and Headington since December 13, the band has raised £203. "We are very grateful to the people of Oxford for this wonderful generosity," said Mr. Frans Wolff, one of the bandsmen. On Christmas morning two parties of bandsmen will make a goodwill tour of Oxford Hospitals.

The band launch an appeal to raise money towards the construction of a new bandhall. 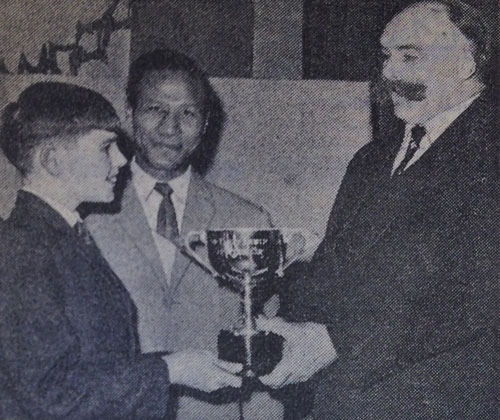 Comedian and bandsman Professor Jimmy Edwards attends a prize-giving at the City of Oxford Silver band.

Prizes given by Jimmy Edwards

Mr. Jimmy Edwards presents the Percy Lewis Cup to David Morgan, who was first in the learner's Section at the City of Oxford Silver Band members' solo contest at Cowley Worker's Club on Saturday. Mr. Percy Lewis in in the centre.

PROFESSOR Jimmy Edwards, a former brass bandsman - "I am a brilliant soloist myself" - presented the prizes at the City of Oxford Silver Band members' solo contest, held at Cowley Workers' Social Club on Saturday.

"If only I hadn't been so busy this afternoon I would have come along and taken some of the trophies myself." said the one-time member of Barnes Borough Band, now Watney's Brewery Band.

The contest attracted 19 entries in the senior section, five in the youth section and 13 in the learners section. The youngest competitor was nine-year-old cornet player Miss Susan Bradley.

The competition's newest trophy, presented this year by Mr. Percy Lewis for the winner fo the learners section, went to David Morgan.

Oxford City Silver band being conducted by Mr. Harold Williams at Cowley Barracks last night in a rehearsal for the Jimmy Edwards Charity concert at the New Theatre on April 5. At the concert Mr. Edwards will conduct three bands.

Professor Jimmy Edwards has no ambition to play Hamlet, but he has several times realised another - to conduct.

Afterwards, the president of the City of Oxford Silver Band, Dr. Bernard Rose, presented him with a baton in a case and congratulated him on a "first class professional performance."

"Thank you, This will light many a good fire." replied the professor twitching his moustache.

He joined in a euphonium trio with Roger Lock and Merlin Roberts of the C.O.S.B. and played a trombone solo, accompanied by the Pressed Steel Band.

Finally he ventured on a cornet duet with Gwyn Davies, of the B.M.C. Morris Motors Band or rather a cornet duel, in which he countered the bandsman's virtuoso variations with defiant repetitions of his own less adventurous phrasing.

The Morris Motors Band had just become Southern Area champions on Saturday, beating 50 other bands and regaining the title they held two years ago. They will now appear at the Great Britain finals at the Royal Albert Hall in October.

They returned on Wednesday from a five-day tour of Holland, where they gave six concerts, including one broadcast.

In his dressing room in the interval, Jimmy said this was the fourth time he had conducted brass bands for charity.

This time two charities benefited, two thirds going to the Lord Mayor's Appeal for the C.O.S.B. building fund for a new headquarters, the rest to the National Youth Brass Band of Great Britain.

For the rest of the interval he tried to work out a comic routine on the lines of those he had done in the first half with Eric Sykes, the programme's genial compere.

"Your E Flat doesn’t sound like my E flat" he complained as they essayed Nellie Dean and the Dark Town Strutters' Ball, with himself on trumpet and Sykes on guitar.

However, in the end, Jimmy and Eric contented themselves with a cross-talk act and Tchaikovsky's 1812 Overture was played without a cannon.

This was the impressive climax of a second half in which the three bands united under the professor's baton, and which included the Light Cavalry Overture by Suppe ("Minestrone to his friends" was Jimmy's footnote).
Derrick Grigs

PHOTO: Jim the jester tries on a new line in headgear.

PHOTO: A euphonic euphonium trio in the shape of Jimmy Edwards, Merlin Roberts and Roger Lock 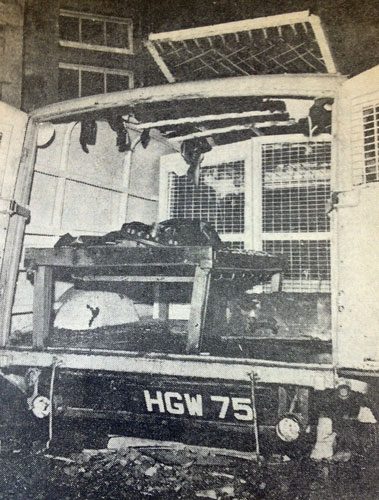 Hooligans vandalise the Barracks bandroom and wreck a van used by the band to transport instruments.

Sousa was late on parade at Cowley Barracks last night. Members of the City of Oxford Silver Band, who usually start their practice night with Sousa on Parade, spent more than an hour clearing up the mess left by intruders.

The band uses part of the old canteen block as its temporary band hut, but since they moved in last autumn vandals have been a considerable nuisance, said the band's secretary, Mr. F. Woolf sic.

Last night's escapade - a break-in without any theft-was the fifth.

When members of the band arrived they found the hut "a complete shambles."

Intruders had taken the band uniforms out of a cupboard and dragged them over the floor, getting them dirty and tearing some of the lapels and badges off.

The instruments, more than 30, had been taken out of their cases and left in an adjoining room used by sea Cadets.

When the practice began an hour and five minutes late the only thing reported missing was a mouthpiece, but one was quickly found.

Outside the canteen block the band's van used to carry their instruments around had been wrecked. The roof had been torn off, a bed frame thrown into the cab and another in the back of the van.

But this, said a band official was damage which had been spread over a long period.

Plans are submitted for a new bandroom to be built in Temple Cowley. Architect.: Peter John Parsons (Abingdon Design Associates) 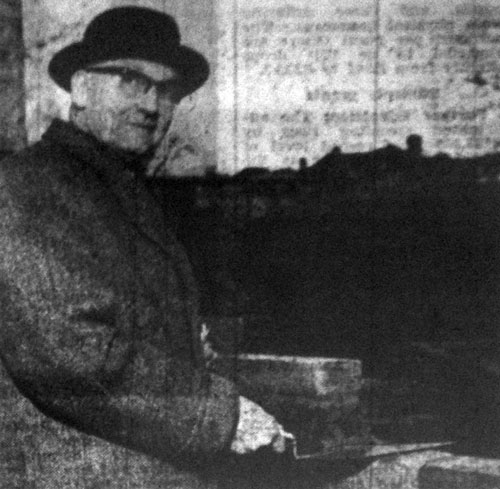 The foundation stone of the new band hall is laid by former Lord Mayor Ald. A. P. Parker 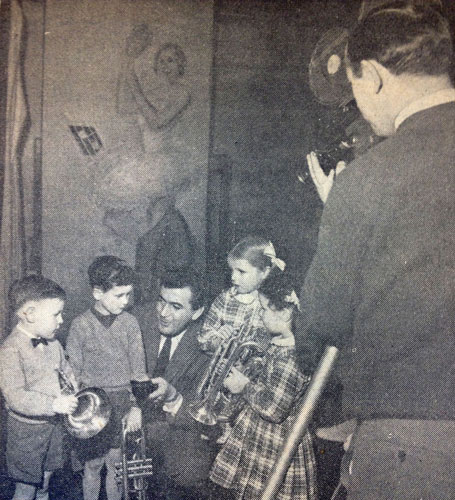