A timeline of news, stories and pictures from 1925.

The Band moved its headquarters to the Cape of Good Hope pub on the plain, Oxford. It is also suggested that the band change its name. 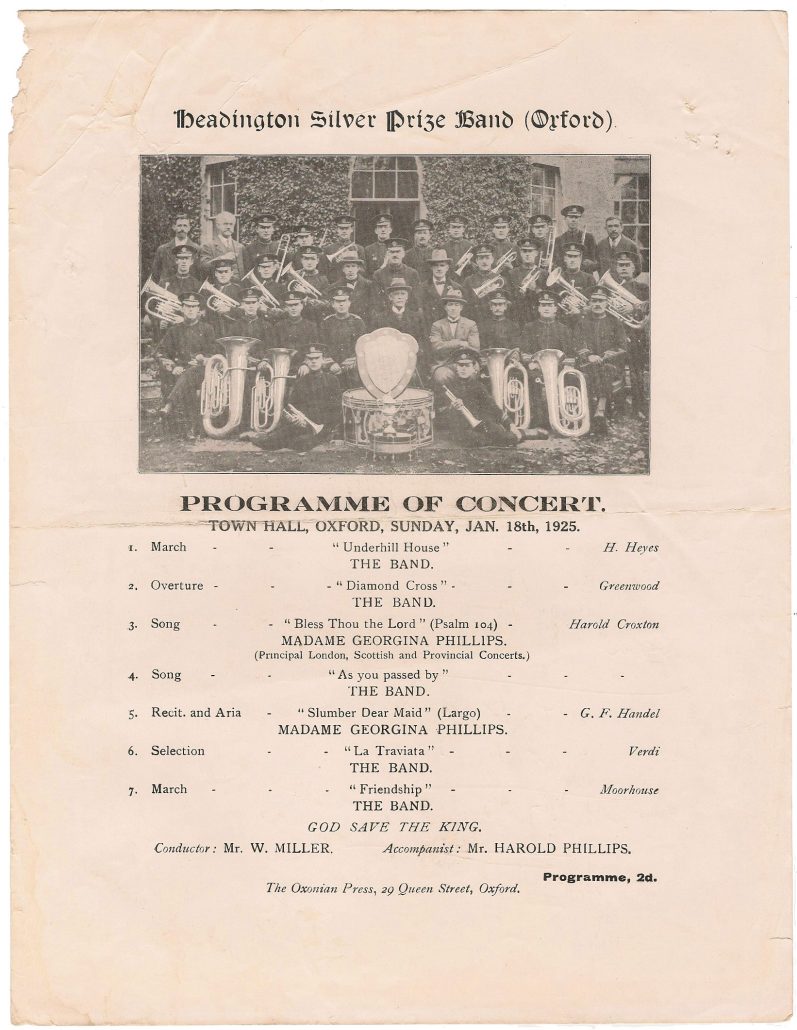 Another musical treat is to store for those who visit the Town Hall on Sunday evening, when a further concert will be given by the Headington Silver Band. Madame Georgina Phillips (of Bath), the well-known contralto of principal London, Scottish and provincial concerts, has been engaged for this concert, and the band, under the conductorship of Mr. W. Miller, will play a specially selected programme of music. Doors will be open at 7.30, concert to commence at 8.15. It is hoped that. Ithe public will support this concert better than the last one was, when 560 threepenny pieces formed the greater part of I the collection.

Programme for a concert at Oxford Town Hall, Sunday 18 January 1925

Headington Silver is still busy, having had several very enjoyable concerts in Oxford Town Hall durmg the winter season. Good crowds have been the rule, but bad collections. 560 threepenny pieces formed the greater part of the collection on one occasion I am sorry to hear that they are likely to lose one or two of their best men, who are joining Morris' Motor Works Band, but Headington will survive it, with such a secretary as Mr. Clifton to help them on. And there are always plenty of learners ready to fill up the gaps.

The Oxfordshire and District Brass Band Association's first annual solo and quartette contest took place at the Women's Liberal and Progressive Club in George Street on Saturday, when nine quartettes and 24 soloists' competed.
... Mr. Hinkins, the well-known soprano cornet player of the Headington Band, played No.2... 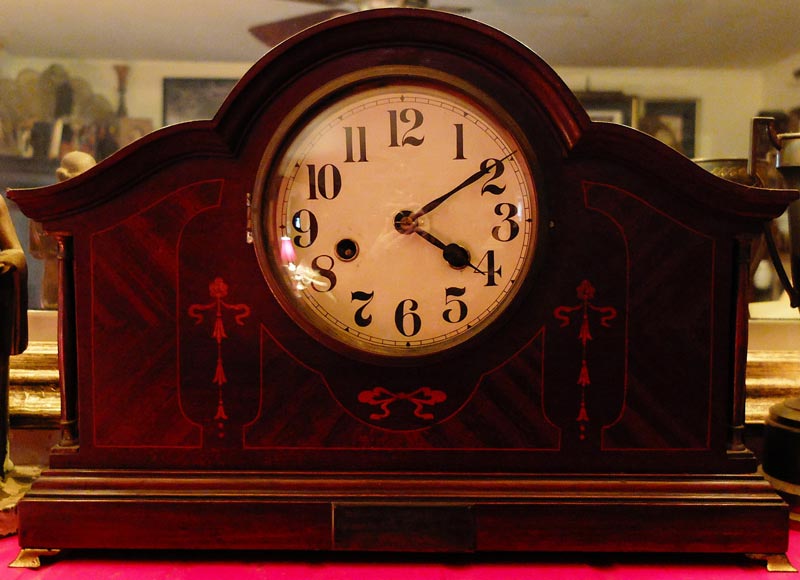 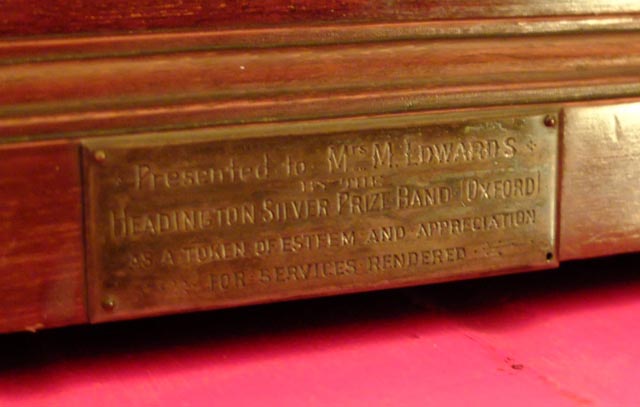 The third annual dinner of the Head[ington Silver Prize Band, at the Britannia Inn], on Feb. 12th, when the bandsmen were the guests of the proprietor, Mr. I. Wyatt, who entertained the band as a mark of his appreciation for their splendid successes during the past year. A goodly company enjoyed the excellent repast served, under the presidency of Councillor E. B. Lewis, one of the vice-presidents. The concert held later was well attended by subscribers and friends, the musical items by Messrs. Parker, Perrior, and Norwood being well received. The able secretary, Mr. C. E. Clifton, during the evening gave an account of the contests attended and results attained, and stated that if possible all contests within a reasonable radius would be attended during the coming season. Two important presentations took place during the evening. The first was made to Mr. W. Miller, who has ably filled the position of bandmaster for some years, and took the form of a handsome watch suitably inscribed. Mr. Miller, in responding, stated that it was the greatest surprise of his life, and he had not the slightest inkling that he was to be the recipient of such a splendid token. He would not value it for its worth, but for the esteem and appreciation shown by the bandsmen, and he hoped that he would live to see the band climb still higher up the ladder of success, which could only be done by the bandsmen working in harmony. (May Mr. Miller live to see his hopes fulfilled!) The other presentation took the form of a splendid mahogany eight-day timepiece, and the fortunate recipient was Mrs. Edward, one of the most active of the band's many lady workers. Suitably inscribed upon a silver plate was "From the Headington Silver Prize Band as a small token of esteem and regard for services rendered." The evening terminated' with a vote of thanks to the host and hostess and the genial chairman. In connection with the Headington Band a special word of praise is due to Mr. C. E. Clifton, the secretary, to whose untiring' efforts is due much of the success achieved by the band. Many may remember the Headington Band some years ago before. Mr. Clifton was connected with it. and they will appreciate the great strides made, due in no small measure to his labours, ably backed up by a spirit of loyalty and good fellowship among the band members. At the best a secretary's job is rather a thankless task; he gets but little appreciation when all is going well, and has to bear the brunt when everything is wrong. A good band secretary is a rarity, and Headington should consider themselves highly favoured in having such a one as Mr. Clifton, who is not only the best in the district, but one of the best in the South of England. Long may he live, and may he see, with Mr. Miller, his band not only the best in the county but among the best in England!.

[Note: The clock later turned up at an antique shop in Etowah, Tennessee!]

The Third Annual Dinner of the Headington Silver Band took place at the "Britannia," Headington, on Thursday. February 12th, when the band members were the guests of Mr. J. Wyatt, who entertained the band as a mark of appreciation for their splendid successes during the past year on the contest field.

The Town Hall was not quite so well filled as usual on Sunday evening, when the Headington Silver Band gave their last indoor concert of the season the artistes were Madame Georgina Phillips and Mr. Harold Phillips, of principal London, Scottish and provincial concerts, and Mr. Harold Phillips, jun., was the accompanist. Mr. W. Miller conducted the band in his usual able manner. Appended is the programme:— March: " Blockade" (J A. Greenwood); air varie, "Beulah" (arr. W. Rimmer), the band; song, "Serenade" (Gounod), Madame Georgina Phillips; encore song. "Spring is here" (Edith A. Dick); trombone solo, "Lend tree your (arranged by Lt. J. Ord Hume), Mr. W.J. Bateman, accompanied by Miss V. Whiting; songs, "The Fisherman" (Gerald Lane), and "Chip of the Old Block" (W. H. Squire), Mr. Harold Phillips; cornet solo, "Ave Maria" (Mascagni), Mr. R. Hinkins; song, "Isis," Madame Georgina Phillips (this song was specially written for Madame Phillips by W.S. Martin); selection, "Classic Gems" (arranged W. Rimmer), and March, "El Abanica" (Javaloyes), the band. Special mention must be made of the excellent rendering of their solos by Messrs. W. J. Bateman, trombone, and R. Hinkins, cornet. It may be remembered that both were competitors at the solo and quartette contest held in Oxford in February. Mr. Bateman secured first prize in his section, but Mr. Hinkins, though he thoroughly deserved to be in the prizes, was unfortunate owing to the piano not quite being in tune. 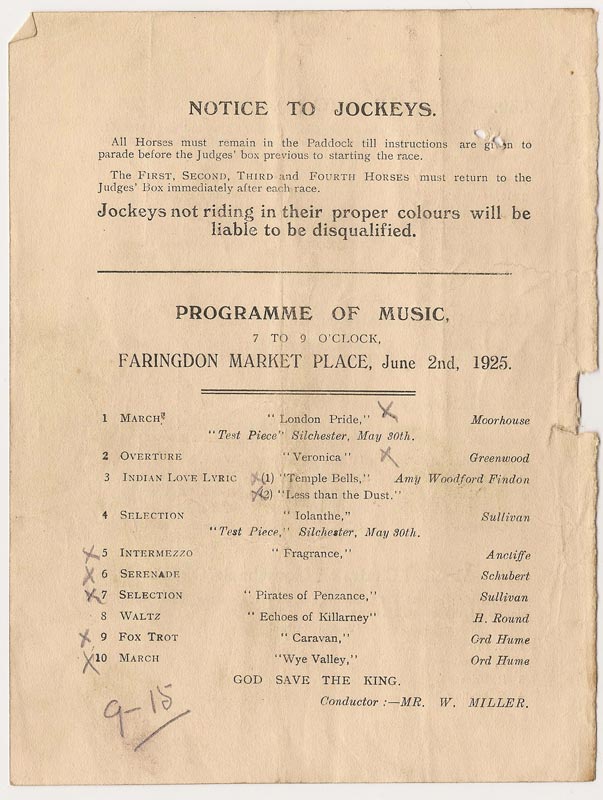 Programme for a performance at Faringdon 2 June 1925

Headington Band headed the procession organsed by the "Imps" last Saturday. I did not have the pleasure of hearing them, but understand that they played fairly - well, though Headington. like many other better-class bands is better on the stand than on the march.

Headington Silver still carrying on. Have not had much luck lately since losing a number of their best men to Morris' Motor Works Band. Everyone must have their ups and downs, Mr Clifton.

The Band did compete at the association contest 18 July 1925 and were 2nd to Morris Motors. The test piece being 'Echoes of the Opera', and they also took the medal for best solo cornet. So although down, were not out!JA

The Headington Silver Prize Band played selections during the afternoon, and provided dance music in the evening.

Headington Silver were at Abingdon on September 20th for a couple of concerts. Good progmmmes were played, and I noticed several L. J. items "Echoes of the Opera" being particularly well rendered. In spite of many setbacks, Headington are still the leading band of the d1strict.

Headington are still carrying on as well as ever, and are worth going miles to hear. They have several Sunday evening concerts this winter in the Town Hall. Hope that they will be well patronised.